Kittens in our car bonnet

August 03, 2017
This is one of those life-happenings that I want to document and read it when I'm older.

Last weekend, we (Z and me) drove to KL. I went off to my makeup class and Z went to check-in to the hotel. Late evening he picked me up and we went off to 1-Utama for our dinner. When we returned to the carpark, someone left a friendly note on my windscreen: 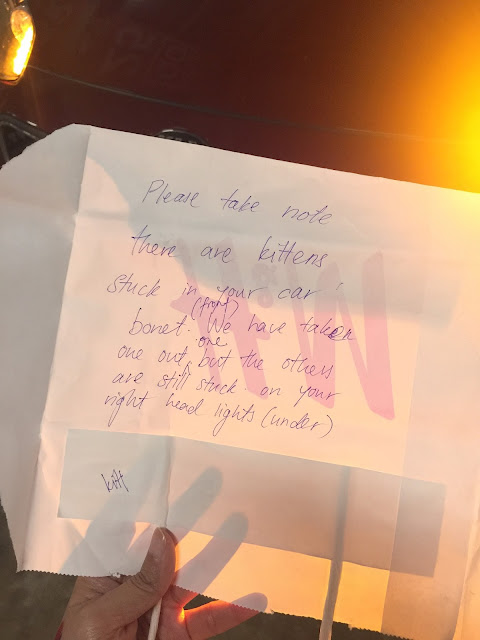 
We spent some time trying to figure out what to do. At the same time we were running out of time, because the parking grace period was going to end soon. We drove back to the hotel and open up the bonnet again to check on the kittens. I believe they are barely a week old. Three kittens were stuck on the left side, it was so cramp-up that they barely move at all. Another kitten was on the left.


To make things worse, it was weekend, no workshop was open and we couldn't lift up my car to open up the front cover. One good thing was they weren't actually stuck inside the bonnet but inside the front bumper of the car.


After hours of emotional stress, we finally decided to move on with our plan. We took the risk to drive with the kittens inside because we don't think they can actually get into the engine part (lucky enough my car is high).


Out of the stressful moment, it was so comical to hear the kittens meowing from the front of the car. Whenever we stop at traffic lights, motorcyclists will turn their head every where to look for the kittens. When they figure out that the sound comes from my car bonnet, most of them have a puzzled look. It's my entertainment of the day. (Although I feel bad for laughing at those kittens' misfortune).


It took us awhile to think where did the cats came from, then we thought, it must be the neighbour's. I was pretty angry because we had to go through a lot of unfortunate events with the cats:


We put up with all those shenanigans because after all, we want to live harmoniously with our neighbour. After a few times triggering them the events, the neighbour did nothing to stop the cat from coming to our side. And we continue to tolerate.

If you love animals and want to keep pets in your own home, go ahead. But BE A RESPONSIBLE OWNER. I'm not sure what would happen if the cat got rollover or stuck inside my car belt and die. I would have gotten mental breakdown if the cat ever die because of me. I don't want to keep a pet because I don't want to subject myself to be responsible over the animal's life. But now I feel like I'm more responsible to take care of the cats rather than the owner. Many times I tried to carry them and put them back to their home. And I can only do so much.

I'm not sure if I'm overreacting or too emotional, but when things happen repeatedly, it gets onto my nerves easily. Whatever complain we send to the neighbour, it just ended on their deaf ears.  I was seriously pissed off. But let's get to the happy ending.

When we arrived back home, the mother cat manage to get into my car and took the kittens out one by one. We took the kittens for a joyride from Melaka to PJ to KL and then back to Melaka. It must be a hell of experience for the kittens.
dear diary